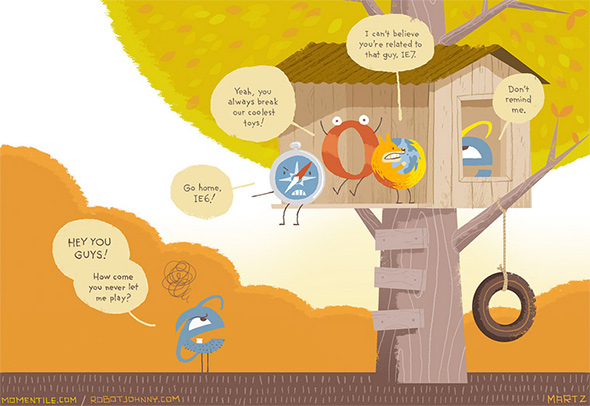 As many of you may know, all our current YOOtheme template and extension releases are compatible and tested with the Internet Explorer 6 (IE6). Since this browser was originally released in 2001 and does not support the latest web standards and technologies compared to modern browsers which offer a rich support for HTML5, CSS2 or CSS3. Not to mention all the IE6 quirks and bugs which were sadly never fixed (Well we guess, every web developer knows what we are talking about ;-)).

Since it's release in 2001, Microsoft realized that the IE6 was not the greatest piece of software they have ever written. So after about 5 years of development on the 18. October 2006 they released IE6 successor Internet Explorer 7.

Furthermore, in March 2009 they even released today's latest version, Internet Explorer 8. Both successors offer a lot of improvements compared to the old IE6 and most importantly a better support of today's web standards. Fortunately the number of people using IE6 is decreasing slowly but steady and the release of the upcoming Windows 7 later this year will surely speed up this process.

So we decided to discontinue IE6 browser support in YOOtheme products by the end of the year 2009. This means all templates and extensions of 2009 will still be IE6 compatible, but starting in January 2010 we will not test IE6 compatibility anymore. By doing so we follow an actual trend of dropping IE6 support, as announced on a lot of popular websites like YouTube, Apple MobileMe, 37signals Basecamp or Digg. Why are we dropping the IE6 support? IE6 is clearly a past-generation browser and cannot deliver a rich user experience that modern browsers can. Also, this step allows us to focus on modern web technologies to optimize and enhance our templates without all the IE6 drawbacks.

We´re sure that this will give our future YOOtheme releases an additional boost, and we can be very excited about what's to come.

Last chance to join the ZOO presentation in Hamburg