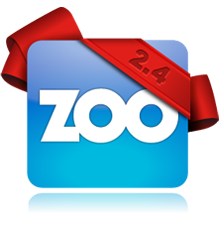 Today, with a bit of pride, we are happy to announce the release of our ZOO 2.4 BETA. As promised we worked hard the last weeks on making ZOO work with Joomla 1.6. And here it is running on both, Joomla 1.5 and 1.6! In this post will shed some light on the new Joomla 1.6 version and take a closer look at the new features.

We had already plans to make a major overhaul to ZOOs underlying framework with the 2.4 release to increase its flexibility. So it was the perfect time to take it for a test drive with Joomla 1.6. To achieve compatible with both Joomla versions we added a new abstraction layer between Joomla and the ZOO. This makes it possible to have the same ZOO version running on Joomla 1.5 and 1.6. This means all functionalities of ZOO for Joomla 1.5 are also available in ZOO for Joomla 1.6. We have not yet fully embraced all of Joomla 1.6s new capabilities but this new framework will make it possible to take advantage of e.g. Joomlas ACL in a future update.

Of course we added some cool, new stuff through the framework overhaul. We are most excited about a new event system which allows other components to easily attach themselves to the ZOO. This is awesome for third party developers. It makes it possible to integrate with other third party extensions like e-commerce extensions.

After each ZOO upgrade, there were still old files from previous ZOO installations lingering in your core ZOO directories. There is a new feature now, that tells you what files are modified or even unknown. It lets you remove those unknown files, to get a clean ZOO installation. But there is a bunch of other new stuff to explore like collapsible categories in the administration UI and a cool new ZOO Quickicon module.

As you already know, our good'old YOOtools will not be converted for Joomla 1.6 as we have already started to work on something brand new here! Currently our YOOtools use Mootools as JavaScript library but as you know we have moved on to jQuery with our Joomla templates and the ZOO extension. This just leaves the tools out which are soon to be replaced by a completely rewritten version that uses the latest jQuery JavaScript library. We are really excited to give you a look at it soon! For the ZOO 2.4 Beta phase it means we will not include the tools as we have used to, because they are incompatible and will be replaced soon. However we expect the new tools to be ready before the ZOO 2.4 goes stable, so stay tuned!

The ZOO 2.4 BETA is exclusively available for members only who purchased the ZOO app bundle. As soon as ZOO 2.4 goes STABLE, it will be released for the public. Members can go straight to the download section in the member area and take ZOO 2.4 BETA for a spin! Be aware that it is a BETA version. It is not intended to be used on a production web site just yet.

We have also updated the ZOO to the Stable 2.3.4 version. It includes quite a few bugfixes and the cool new ZOO Quickicon module.

Please give us your feedback and tell us what you think!